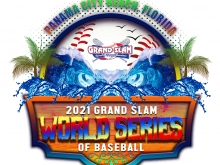 Presented by To Be Announced

FOUR SESSIONS TO CHOOSE FROM

For more information contact the Grand Slam Corporate office at grandslamtournaments@gmail.com or text

**SKILLS COMPETITIONS WILL BE HELD at a TBA time and TBA location on Monday & Tuesday during the week of your event.  There will be THREE Competitions, ONE TEAM competition and TWO INDIVIDUAL competitions.   We will award champions in each age division.  Coaches must sign their players up ahead of time at the coaches meetings on Sunday in order to participate.

** Dates and Times are subject to change based on weather and other factors.

•    Each team will have 9 position players.

•    Each outfielder will have a base placed in a standard outfield spot which they will have to touch before they can throw.

•    Each infielder will have to touch the base before they can throw.

•    A 5 second penalty will be given for each missed base

•    How the competition works

Make sure you have players backing up each throw, your other players my retrieve a missed ball and give it back to the player that has to throw it. The player backing it up may not throw the ball to the next base only the player that is playing that base. The

player backing up the play must be one of your nine player's being used in the competition.

THE INDIVIDUAL COMPETITIONS will be the HOME RUN DERBY & GOLDEN ARM competitions!  We are going to increase the Max of players per team allowed to participate in the individual competitions to 6. ** This should allow most teams to include all their players in the competitions if you choose.

GOLDEN ARM:  Player will stand 150-feet from home plate in CF and have 3-throws to try and hit a target at Home Plate.  Most targets hit wins.  Balls      can hit target on the fly or only bounce ONE time to be counted as a hit target.  In case of a tie, we will go to sudden death, one try for each player tied    until we have a winner.  Some age divisions may be moved closer to target.

You are not currently signed in. You may submit your schedule request after signing in as a team administrator.